Drink
Welcome to the new blog. I have a gin blog, a beer blog and a cigar blog and I was about to create a food blog but I had a brilliant idea: Why not combine them all into one blog...

The current craze seems to be EatDrinkXXX... I've seen the EatDrinkPlay, EatDrinkTravel, DrinkEatTravel and EatDrinkGarden blogs... It's high time there was an EatDrinkPuff blog! EatDrinkSmoke is already taken by a chap in the U.K. and many would confuse smoke with cigarettes or pot, so EatDrinkPuff is a fitting alternative. Hmmmm.... Maybe I should have called this EatDrinkPuffTravel. In any event, here we go...

The weather in Southern California is wonderful. It rained all night but cleared up by noon. I'm sitting outside now with a stogie, a Belgian ale, roasted peanuts and my laptop.

First let me give a brief overview of tonights blog-writing accompaniment. 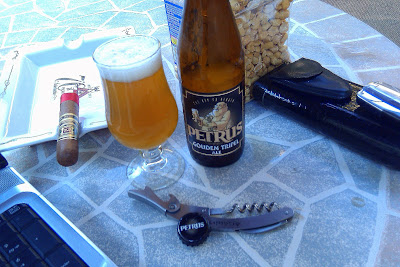 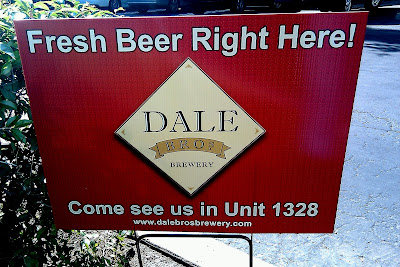 Now back to Dale Bros...
I've been following Dale Bros. Brewery for the past year or so (can you imagine why?) when I first discovered them on a list of brewers who were going to be at the OC Brew Fest in 2009. They didn't show and they didn't show at this year's event either. Luckily, I was able to purchase some bottles at Pacific Wine Merchants. The Pomona Queen is a very good.
Back in July, I finally found the Dale brothers at the Claremont Blues and Brews event and just this month at the California Beer Festival in Claremont. If you haven't tried the Oktober-Fiesta, it's a very good amber lager that will soon be gone. It's a dark and flavorful Oktoberfest with a nice crisp finish. 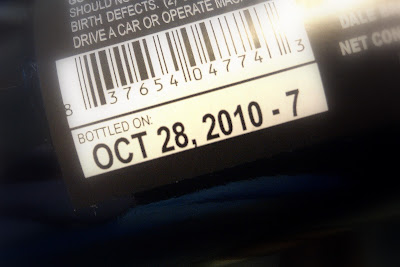 Dale Bros. has been around since 2003 and they are now riding the craft beer popularity. They've grown out of their little space in Upland so it's time to move down the street to a bigger facility. I've been disappointed that they didn't have a tasting room at their brewery but my prayers have been answered. After perusing the blueprints of their new space, I spied a tasting room on the plans. I can't wait!
This new big space calls for a celebration and Curt and Andy Dale threw a party to welcome their faithful hop-heads to their new space down the street a bit on the opposite side of 9th Street. A nice big facility! The pre-grand opening party had music, BBQ, cheese, taquitos, cupcakes and plenty of brew. Pomona Queen, California Black Beer, Oktober-Fiesta and Winter Haze were all on tap. 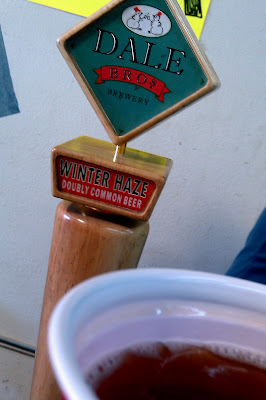 The Winter Haze was filtered and bottle just two days ago in keeping with their motto, Fresh Beer From Nearby!
I must say that they are a bit Internet challenged. They do have a website and a Facebook page but their online store has been "coming soon" for quite some time. I'm sure their fans were quite pleased with the array of shirts, glasses and bottles of beer for sale at the event. I wish I had the time. I'd offer to work their website and Facebook page and set up a Twitter account for them.
They debuted their Winter Haze seasonal today. It's a California common and quite good. They call it a Doubly Common Beer as they use twice the ingredients and the result is a fantastic full-bodied, complex beer with plenty of flavor. I've never been fond of the extreme hoppy IPAs. I can handle a pale ale and this beer approaches the hoppiness of a pale ale. I found it extremely satisfying.


I'm looking forward to the new Dale Bros. tasting room. I hope it brings new brews at a more frequent pace like many of the other local breweries in the Los Angeles/Orange County/Inland Empire area. While most of our breweries are restaurant/breweries, there are some stand outs: The Bruery, Bootlegger's, Hangar 24, Ladyface and others. 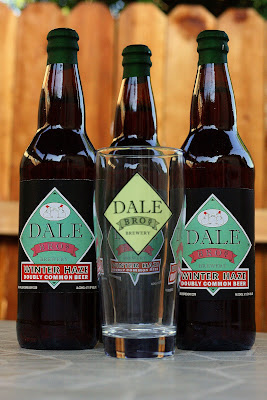 I took advantage of the opportunity and purchased a Dale Bros. glass as well as three bottles of Winter Haze. Should I drink them myself or share with friends. I haven't decided.


Well, the sun's gone down, the clouds are gathering, a breeze is blowing, my cigar is done, I've finished my ale from Belgie and my laptop battery has died. I've moved inside to finish this post and see that they Rangers have won game 3 of the World Series. I was rooting for the Rangers at first until I heard what a-holes they were during the game against the Angels when they clinched their playoff berth. I see the Giants humbled them a bit in games 1 and 2. Hopefully, they've learned a lesson.


So here ends my first post to Drink Eat Puff. My goal is to post a new entry each week. I'm not sure that will happen. I'll do my best. Stay tuned.


Next up: Cuban cigars? Are they really that good?

Welcome to Eat Drink Puff. A blog all about food, drink and cigars. Coming soon...
Posted by Dale at 1:43 PM No comments: