I have a habit of ending a blog post with a hint of what's coming in the next installment. Those promises never seem to come to fruition. Here I go again. I promised that this edition would be about my second trip to North San Diego County to visits breweries but that's not what this is about.

I was waylaid by a spur of the moment beer and cheese tasting event hosted by Marian the Foodie at The Bruery Provisions in Old Towne Orange. Spur of the moment for me, not for Marian, who had planned this event for some time. She had a couple of last minute cancellations and through the power of Twitter and SMS, I was able to snag a spot at this private event. I had not discovered Marian's popularity on the Interweb but now know all about her blog, YouTube channel, Facebook fan page and her Twitter feed. She did a great job with this event. I had a great time!

This was not my first time to The Bruery Provisions so I knew what to expect and I wasn't disappointed. Great beer & cheese are always on the menu and tonight was no exception. Special tasting menus were printed just for use with thorough descriptions of each beer and cheese.

Beer Flight (All by The Bruery) 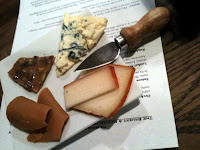 Cheese Plate
Did I stop there? No. My thirst was not quenched so I ordered a Stout and Porter flight and reveled in five wonderful dark beers with exquisite flavors. From right to left. 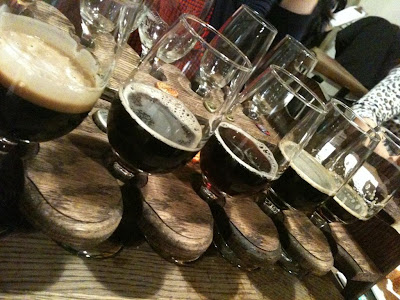 I also took home a nice loaf of bread. I have no idea what it's called or who made it. One of the very attentive staff told us that it's made mostly of crushed grapes. After the juice is extracted for wine, a bit of flour is added with some other spices, such as rosemary and fennel, to create a wonderful purple bread. It's a perfect accompaniment to the fantastic cheeses we sampled.
Thanks to Twitter, The Bruery Provisions and especially Marian the Foodie for a great time tasting new beers and new cheese. You can see all my beers posted on @Untappd.
Next time? Well, I'll be at a Bootlegger's Brewery tasting tomorrow night at Versai Wine Bar...
Posted by Dale at 11:07 PM