The Beer Fest that marked the end of LA Beer Week was a huge success. The event was sold out and the late October weather was much warmer than last year's overcast and wet weather. After crashing the Volunteer's after-party last year, my conscience got the better of my and I became an official volunteer for this year's fest. 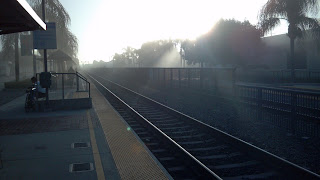 The beauty of the LA Beer Week Festival is it's location in downtown Los Angeles at Union Station. I don't know what parking is like near Union Station but I do know that I can easily park my car in Fullerton and catch the train to the festival. Well, I could if I was just an attendee. The festival was open from noon to 4pm, but as a volunteer, I was needed from 10 am to 8 pm. The only MetroLink trains running that early are on the San Bernardino line. 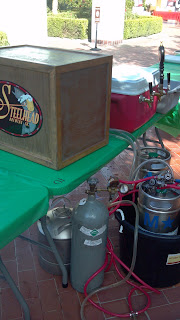 So, I was up at the crack of dawn to catch the 7:51 from Covina to Union Station. It's a good thing I left early because CalTrans had two freeway closures in place that had me wandering all over eastern LA county. I made the train on time and enjoyed a great breakfast at Philippe's before I showed up to volunteer.

Once I found my assigned table, I was happy to discover I was working the Steelhead Brewing Co. table on "Orange County Row." To my left was Taps, The Bruery and Karl Strauss and to my right was Cismontane. Karl Strauss is based in San Diego but I consider them an OC brewery since they have a location in Costa Mesa that I became familiar with during law school.

As I waiting for Eddie Leal, Steelhead Irvine's head brewer, I helped set up kegs at the Taps table with Brewmaster Victor Novak. At the Cismontane table, Andy was giving assignments to the volunteers at a rapid pace. I didn't have much to do at my table since Eddie had arrived early, set up and had also walked to Philippe's for an original French dip sandwich. 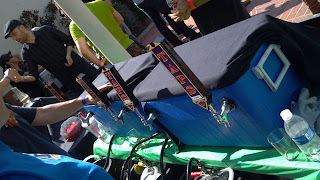 Twelve o'clock arrived and the festival goers began trickling in. According to Aaron from BeerBikesButts.com, a riot was about to break out at the front gate as the line to enter was not moving. The drinkers I was pouring for seemed happy, but I understand how things could get nasty if you keep a man from his beer.

The day went well. We ran out of Guava Licious IPA. It was a big hit. Good word of mouth kept people coming to our table for a taste. The Espresso Stout was well received as well. I learning a lot about beer, brewing and the business from Eddie. It was a great experience. Clean up was simple.

Now for the after-party. The organizers told the volunteers that we couldn't eat or drink until the entire area was policed. We discovered a few bottles that a distributor had left behind and after some hesitation, we were encouraged by the organizers to take a bottle home. I put a couple of brews aside with my jacket only to find later that they had disappeared. No worries, I was enjoying great food and some great beer that wasn't available to the festival attendees. Another bottle was offered to me and like a fool, I sat the bottle with my jacket, only to find it gone a few minutes later. Was I naive to believe that there are no selfish people in the industry? A pity.

Other than three lost bottles of great beer, I was able to try some great beers and talk to the brewers in a lest hectic setting than during the main festival. I met Andrew Marshall, the owner and brewmaster from Black Market Brewing in Temecula. We spent a few minutes talking ethics and philosophy. Cyrena from Ladyface Alehouse & Brasserie and Melissa of Melissa Kobe Photography were also there. Ladyface Alehouse is a place in Agoura Hills to enjoy great food and locally brewed craft beer. Melissa is a fantastic photographer. Be sure to check out her website.

My train didn't leave until 9:00 so some of us moved the after-party to Far Bar for more craft brews. I was still able to walk back to Union Station, purchase a Los Angeles Starbucks coffee mug and make my train with minutes to spare.

Next year I'm back on the other side of the table to as a festival goer. Volunteering was great but watching hundreds of drunk people was a little crazy. Next year I'll watch the sober people.